Feasting and the inauguration of Fez Cooking School

Copper pots gleam in the sunlight, a basket of summer vegetables sits neatly on the oiled stone work surface and a thick red satin ribbon flutters gently in the wind. The scene is set for our official opening.

And the celebrity set is drawing quite a crowd. Souad Tilliette, wife of the French Consul in Fez, arrives early. She is of Lebanese origin herself so shares something in common with our honoured guest who is here to open the Fez Cooking School. Sacred music festival goers arrive, drawn by the vast subject that our guest has been researching for over three years. Many members of the UFE association (An association for French citizens living abroad) are here too.

The audience wait between the huge terracotta pots, home to olive trees but also tomatoes, peppers and aubergine and a riot of summer herbs used in the rooftop cooking. Then the idle chatter dies down as our honoured guest arrives. Anissa Helou, celebrity chef and writer, expert in Middle Eastern cuisine and author of the newly published book Feast, picks up the scissors and snips the ribbon. The audience claps and the Fez Cooking School is officially open.

The guests make their way downstairs and sit under the shade of the citrus trees. Waiters at the Palais Amani weave their way between them serving them refreshing homemade lemonade. A traditional Fassi recipe that is not over sweet and scented with vanilla is greatly welcome on this hot summer’s day.

Anissa Helou in her signature crisp white shirt and dark rimmed glasses takes her place by the fountain in the centre of this luxuriant garden, waiting patiently for people to settle. Behind her, at two of the cooking stations that are used in Fez Cooking School are chefs Houssam and Zakia, each preparing dishes from Anissa’s book to be tasted later on. She taps the microphone to check it is switched on and silence falls expectantly.

“We welcome Anissa Helou here today. It is not only a great honour to have someone of your expertise to inaugurate our Cooking School, but in the context of this years Music Festival and it’s theme, ancient knowledge, it is so appropriate that you are with us today to share some of the insights into such a vast subject that you have been researching. So my first question is about the vastness of this subject. Most writers will tackle a type of food, or maybe a country. But you in your new book Feast: Food of the Islamic world, have decided to research food from a religion! Can you perhaps start by telling us why you chose this way?”

Anissa Helou, author of Feast: Food of the Islamic World.

“I first started writing about middle eastern, or more precisely Lebanese cuisine when I realised that due to the socio-political climate, our displaced nation was losing touch with the cuisine of their origins. With this book, my aim is also linked to the current socio-political climate. Since 9/11, the rise of the Arab spring and the consequences of Daech, the Muslim world is often portrayed in a very negative way. My aim was to do my part at putting back the positive that is so present in these diverse and rich cultures. You know my way of writing about food is not only to anchor recipes, but also to share the stories of those who opened their doors and their hearts when shared their knowledge with me on the way.”

“How long did it take you to put it together and what were some of the challenges you faced in writing this cookbook?”

“Although I have been interested in and have written about cooking from parts of the Islamic world for decades now, this particular book has taken me over three years to research and I have travelled to over 12 countries from Indonesia and China, to Pakistan and Iraq and Zanzibar, Morocco and Senegal, during that time.  Some countries are absent as it was not safe to go there, but really one of the main challenges were what to leave out of the wealth of dishes that I discovered or rediscovered on my journey.”

A member of the audience:

“Diverse you are right in saying! So would you say there a common theme in all these cuisines?”

“There are three main cuisines that have greatly influences the food of the Islamic world. First the influence from Persia, with the mixture of sweet and savoury and the richness of spices that are prevalent in Moroccan cooking today for example, then the Ottoman and Mughal Empires. These influences have woven some common ground but also play on its diversity. I would however say that there is a common theme linked through bread and rice, which is one of the reasons that my book has chapters dedicated specifically to those foods. But the common theme for me is that of celebration and the joy of sharing, hence the title of the book, Feast.”

The discussion went on to explore the technical challenges of writing a cook book and making sure that the recipes work, what editorial choices are necessary to illustrate an anthology of this kind, what her favourite recipes were, and who this type of book is aimed at. We ended with the question of what Anissa Helou wished to be taken away from reading her book.

“I hope that people will not only enjoy reproducing some of the delicious food that is found in the Islamic world, but through my travels and anecdotes, come away with more of an understanding of and a compassion for these cultures linked by a common religion.”

And as we sat in the palace gardens that are a delightful example of our Arab Andalusia heritage, the audience and speakers tasted some of the delights that are found in Anissa’s book.

Muruziah, a slow-cooked tender Moroccan festive dish served after Eid here made from leg of lamb, raisins and almonds perfumed with cinnamon and rose water, fell off the bone and melted in the mouth. Zaalouk, a crushed aubergine dip, was served along side its Iranian counterpart, Borani-E-Badenjân, also crushed but with yogurt and chopped walnuts. Lebanese Spinach Fatayers were served piping hot straight out of the kitchen with a sharp yoghurt mezze from Syria.

And the afternoon slipped contentedly away as the food from so many nations brought as many nationalities together erasing difference and embracing similarities in the wonderful way that food does. 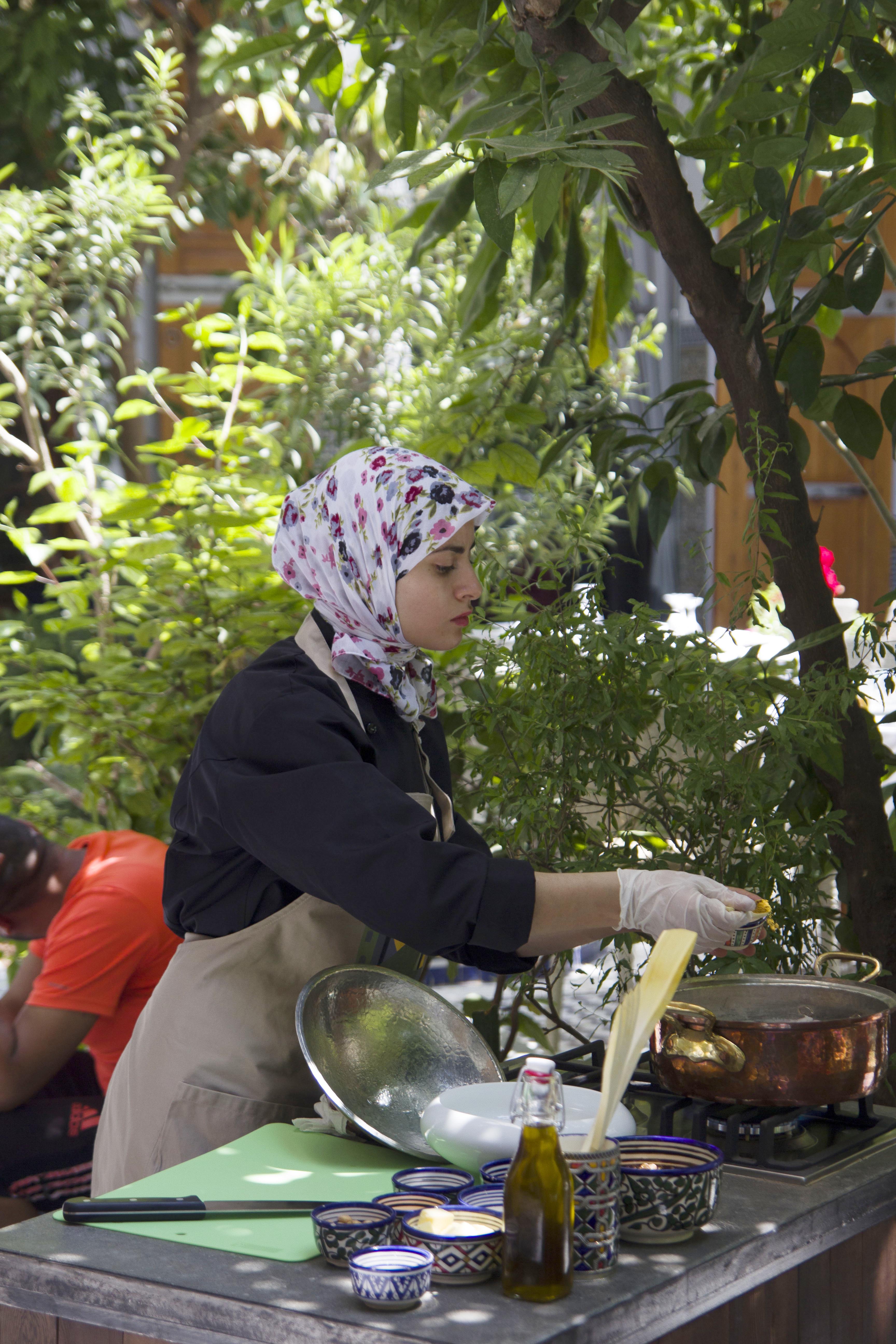