It’s that time of year

So it’s that time of year again, time for olive trees to arrive at the Palais Amani. Every year, just before the festive season, we source two mature trees on the outskirts of the city. This way we save them from a part of land that has been tagged for development or road expansion. The price is agreed and they are dug up. The following day they arrive at the car park at Oued Zhoune just metres away from the palace. 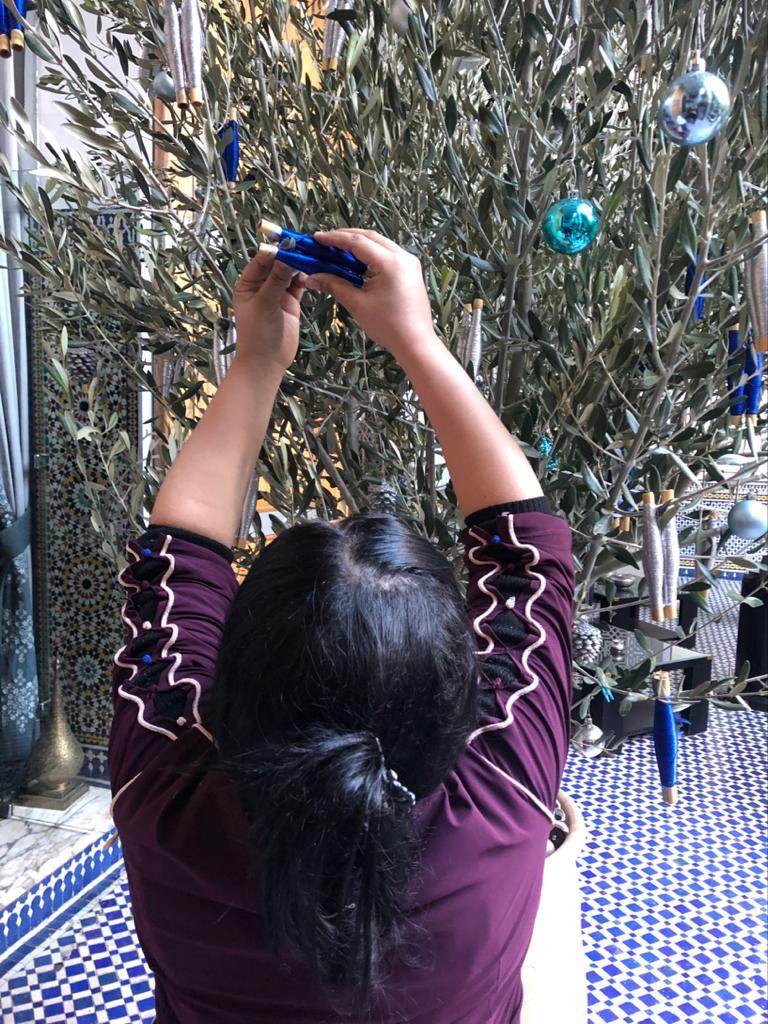 The difference in perspective between a tree planted in a field and the size of it once it is uprooted is always astonishing.  What seems like  a small tree in the field becomes a unwieldy mass of root, bark and branch by the time it is dropped off. The task of getting the trees up the alleyway and into the hotel  involves many bystanders giving advice on which way to manoeuvre. And involves many members of the team to drag the cart up the steps and tease it round the corner.  It is then shunted up the last straight part of the alley way to our door. But we manage each year and I make a mental note not to forget the root mass for the following festive season.

Traditions are mixed and reinvented

Our annual pair of olive tress is our way of embracing cultural difference. It’s our version of a Christmas tree, in a Muslim country, a symbol of peace to celebrate the end of the year. They are decorated with objects from the medina:  hand-stitched camels, babouche key rings and multi-coloured silk bobbins. We find them   in the small shops in the embroidery district of the medina. The silk bobbins are sold either in a star configuration that we have used to decorate the rooftop bar at palais amani, or in twos tied together side by side.

« Curious », a guest said a while back as she admired the trees once the decoration had finished,

« Curious, that you decorate essentially a Christian tradition here in a Muslim country with mini Torahs, the dual rolls of the sacred Jewish texts. »

For the silk bobbins, sold in the shops just off the Taala Kebira, the main drag that goes from the Attarine Madrasa up to the blue gate, look just like that. Miniature dual rolls in a myriad of colours that would be perfectly suited to contain the sacred texts.  And how fitting I thought, that in a place visited by so many people from every origin and belief, traditions are mixed and reinvented. But this year I learnt that our team have woven their own story around our end of year reinvention.  With time our Olive tree tradition has taken on a whole other signification.

At the beginning of December when we were still searching for the right trees I joined the team in the staff canteen for lunch. The subject was about the lateness this year of the trees. There was a collective anxiousness that made me tune in more attentively. Were they concerned that the delay running into the high season would not give them time to decorate the trees properly?  The pride in getting the trees just right is something that has grown over the years. The annual debate on colour theme and objects of decoration during the staff meals in early December has grown too.

The debate inevitably ends with the same conclusion. Because every year the tree outside the restaurant is decorated in blue and white. lie Just like the Fez blue omnipresent in the courtyard’s zellige. And outside the salon, the tree takes on a fiery red and gold just like the evening fire that warms the salon on the opposite side of the garden. I went on with my meal and looked at my phone,

“They are coming this year aren’t they?”  Said Rachida not quite making eye contact with me as she said it.

I raised my eyebrow and frowned supressing my smile.

“The trees!” said Rachida raising her voice, “when will the olive trees arrive at the Palais Amani! “She set off an avalanche of giggling.

And with a slowness of someone having to guide a child through the obviousness of the adult world she listed off:

Our own Amani Magic

“ Fatima put the first  silk bobbins on the tree the first year we celebrated Christmas. In the year that followed she got married. On the second Christmas Siham was the first to hang the star. Next year she had a baby. Najia was the first to add a caravan of camels around the base of the tree on year three. She soon got married.  And you do remember that Hanane had her baby after the fourth Christmas? She was the one that year to start the decoration. Nezha got married shortly after year five and she was the one to start the decoration that year, so you see?” she ended, “I really really want to get married next year” and the canteen erupted into laughter once more.

The olive trees arrive at the Palais Amani

A couple of days later the trees arrived, with the mental note on root mass and branch density from the year before inevitably forgotten.   For the ninth consecutive year I watched the bystanders giving heated advice on how to manoeuvre up the steps. I watched the team straining to drag the karosa cart to our door. I couldn’t help but notice the sparkle in Rachida’s eyes as bright as the decorations that would soon be on the trees. Crossing my fingers, I shut my eyes.  I smiled at how I too was caught up in our own Amani magic.   And maybe once the festivities are over, and this years trees have joined the ones from years past on our roof top terrace in big terracotta pots, there will be an outbreak of youyou’s from Rachida’s colleagues as her wishes have been granted.