Morocco is no exception to this unfortunate fact. It is rare to find a woman in a professional kitchen. Recipes in Morocco, like in most countries around the world, are handed down from generation to generation, from mother to daughter.

This past decade however has witnessed the rise of several Moroccan women chefs such as Meryem Cherkaoui or Nargisse Benkabbar.

Meryem Cherkaoui is considered to be the ambassador of Moroccan gourmet cuisine. Nargisse Benkabbar, author of Casablanca: My Moroccan Food has embarked on a mission to make Moroccan food “global” whilst preserving it’s authentic essence.

These two figures are real inspirations to many young Moroccan women. All sorts of positive horizons are now open for them.

Another impressive woman that deserves to be talked about is Nora Fitzgerald Belahcen, founding president of the AMAL Center in Marrakech. Nora grew up in Morocco, studied in the United States and has devoted her life to improve her local community. The Amal Center, a non-profit organisation, works to empower women and has dedicated its efforts to the disadvantaged women.

Its main role is to train women from difficult social backgrounds by offering a 6 months kitchen training to allow them to get a secure job.

At Fez Cooking School and more specifically at the Palais Amani we take gender equality very seriously. Women occupy most of the managerial positions. Mutual gender respect and recognition is a ground ethical rule that is respected all year round and not only on International Women’s Day.

Hopefully with this rising awareness and empowerment in Morocco, we will soon be eating in many renowned Moroccan women’s restaurants. 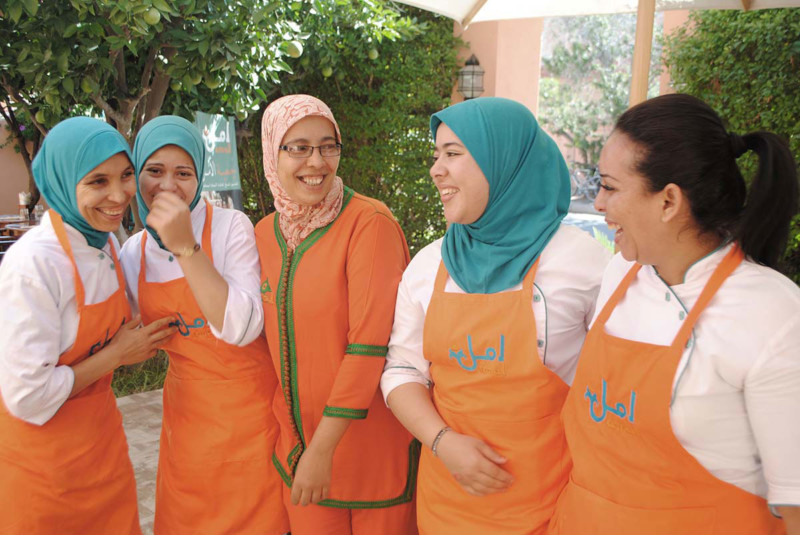