Friday is the holy day in Morocco, where the mosques are the fullest; the midday prayer is the longest and where family kitchens excel in the variation and refinement of the Friday Family Couscous. But Sunday is the day where most people mark a pause in their week and take time out.

With the first signs of new season sunshine, taking time out is done in the literal sense of the term: it would seem that everyone heads outside for the first patch of green that is easily accessible to picnic and sit on, to enjoy the light, the warmth and the fresh air.  And it can be any patch of green: at Oued Zhoune, the bottom end of the medina near Fez Cooking School and Palais Amani, an untended roundabout in the middle of the main road has become an overcrowded picnic site on Sundays, as families claim temporary residence amongst the wild mustard and high grasses.

For those who have transport, the remaining olive groves that are surviving the frenetic building speculation surrounding the new city are dotted with families.  Cars are parked; boots thrown open and camps are set up, for a day’s picnic and leisure. Acrylic blankets compete with the riot of colour in the countryside: there is nothing subtle about springtime in Morocco. In the high grass, great splashes of orange marigolds clash with poppies, fat creamy daisies stand out amongst violet blue borage, and rainbow blankets are slung between trees to cordon off areas for families to create an ephemeral reproduction of their home life.

Like anything to do with food, picnicking in Morocco is a serious business that puts our hastily cobbled together sandwich, apple and perhaps a few raisins in guise of a picnic to shame.  Here a kitchen area is set up with pots and plates and camping gas, and ‘dwouz,’ (a dish with a sauce that is generally meat based, accompanied by seasonal vegetables or pulses, and dried fruit) is reheated and served on a large round dish, placed on a big rug laid out on the floor and the family eat together sopping up the sauce with a piece of bread. A chunk of flat bread is held in the palm of the right hand and the thumb is used as a pincer/collector implement to break a piece of meat off, and crush the sauce and vegetable accompanying it into the mouth sized bread before it is popped into the mouth. Eating with your hands, therefore requires hand washing facilities so the boot of the car will also house litres of water, and a makeshift bathroom is de rigueur in these picnic set ups.

We drive past the olive grove to the west of Fez’s outskirts and I see a father with a large water bottle bent double to wash the hands of his child before or quite probably after their Sunday lunch. For we had started out late on our Sunday outing so many of the families had finished eating. Amongst the trees children were playing football or playing catch. One child was on a swing that had been set up on a lower bough, and the elder members of the families were lying under the trees having a digestive nap.

We take the national road that rolls or rather ripples its way westwards, roller coaster style. The broad bean crop is coming to the end of its growth, and this Sunday, the plants that are predominant are low growing, feathery chickpeas and rows of star-like leaf of potatoes. I am always a sucker for anyone selling baskets or straw hats so on the crest of a hill we stop to look at the barrage that is healthily full at the moment and to see what the reed covered stalls are selling. As well as hats and baskets there was a selection of uninspiring dried fruit, strange long gourds, fossils and some rather jaunty woven tagine mats.  Despite the vendor’s friendly encouragement, none of his wares are tempting enough to actually purchase and we carry on in full chlorophyll technicolour heading for the town of Moulay Idris.

I have been along this road many many times, but the sudden appearance of the ruins of Volubilis on the plain cause the same leap of a heart beat and a smile. Capital of Roman Mauritania in the 3rd century BC, their pale yellow stone forms, gentle against the insolence of springtime greenness, sprawl over an impressive 42 hectares, unassumingly just being. But Volubilis was not our final destination on this sunny Sunday. Today our mission is less educational and we carried on along the road in search of a well-cooked tajine.

Niched in the Zerhoun hills and nestling in the landscape like a white dromedary, a head shaped part of the town and its single bump came into view, as pleasing as ever. We turn into the town up a steep road that makes its way between the head and the bump of the beast to be hailed by a number of enthusiastic food vendors and car park attendants. Despite their insistence to stop instantly we carry on into the town and park just past the triangular square that is the entrance to the Moulay Idris’s mausoleum. Moulay Idris 1st the founder of the Idrissy dynasty was poisoned in 791 on order of Haroun Al Rachid due to the successful and threatening expansion of his dynasty. He was buried in the town that now bears his name not far from Volubilis.

Knowing that the founder of Morocco’s forth dynasty died by being poisoned, it seems an unfortunate choice of destination for our Sunday lunch. But undeterred by the irony of the situation, we make our way along the longest side of the triangle, that is lined with cafés selling grilled meats and charcoal cooked tajines. The lids of these tajines are lifted for inspection as we approach.

Traditionally tajines are made almost entirely of vegetables, mostly onion, potato and carrot with an occasional courgette thrown in. But they all start with a knuckle of meat in the base. So it was the first time that I have been offered a fully vegetarian option: even in Moulay Idris times are changing as the eating habits of their international customers are being accommodated to. We are lured in by the promise of a particularly appetising variation including fresh green peas, prunes and tomato.

We sit down and sheets of craft paper are placed on the slightly sticky red and white plastic tablecloth, and we eat sharp green olives and flat bread with strong mint tea whilst waiting for the tajine to be served. The tajine is slow in coming and when brought to the table it turns out to be the less exciting cauliflower option not one we’d chosen. That one has apparently been served to another table.

‘But very good! Same same’ came from the waiter with a flash of a large smile and a rapid exit.

Some things are harder to change it seems, and on a good day that you don’t always get what you order doesn’t really matter in the great scheme of things; the tajine, though lacking its peas, is steamy, delicious and large. So we finish the meal off with a short yet stiff digestive walk up to the top of the town to see the Mausoleum from above.

Once through the crowd of nougat vendors and stalls selling candles, incense and prayer chaplets, we stride through narrow and empty streets whitewashed in shades of green and turquoise, reminiscent of the streets of Chefchouen only a greener, less crowded and more authentic version of a hilltop town, devoid of tourist trinkets and hippy artwork. We admire the tiled rooftops of the Mausoleum then walk down wards, hop back in our car and drive back to Fez, bellies full and minds content. 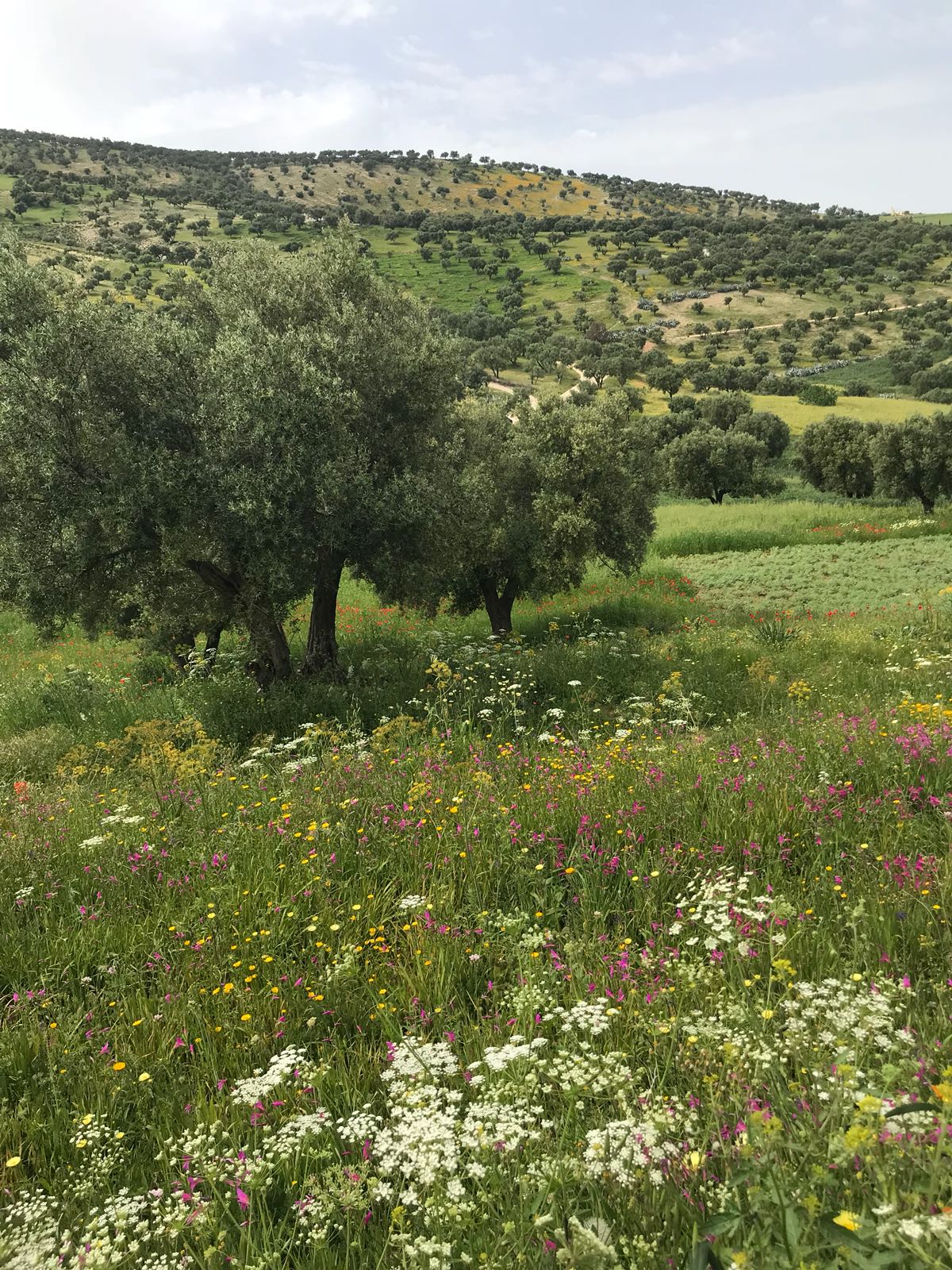